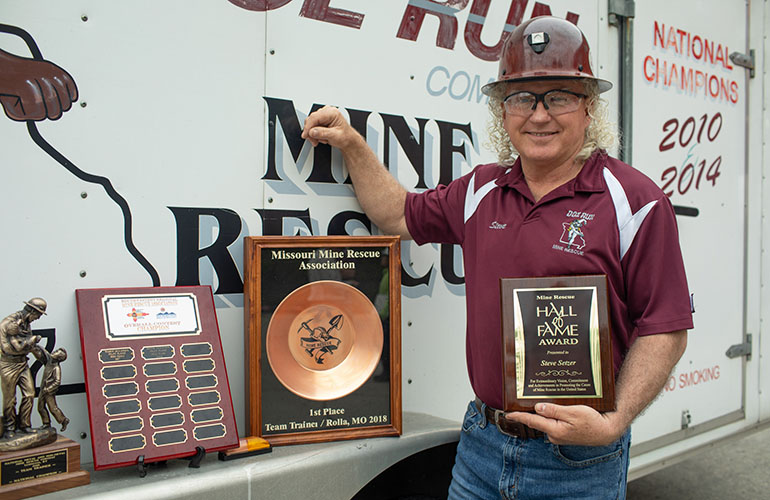 Doe Run’s Steve Setzer was inducted into the National Mine Rescue Hall of Fame in recognition of more than 30 years of dedication to mine rescue. Doe Run’s Gray and Maroon teams continue their commitment to mine rescue by achieving safety milestones at competitions throughout the year.

After 54 regional competitions, 13 national contests and two national championship titles, employee Steve Setzer received the ultimate recognition for his decades of mine rescue leadership – induction into the National Mine Rescue Hall of Fame.

With more than three decades of dedication to mine rescue excellence, Steve joined other honorees in the Metal and Nonmetal (MNM) National Mine Rescue Hall of Fame during the National Metal and Nonmetal Mine Rescue Competition in July 2018. Steve also won the National Trainer Competition at this event, and led our Maroon Mine Rescue Team to earn second place out of 43 teams. He joins Doe Run retiree Denny Dickerson, who was inducted into the Hall of Fame in 2016.

“I’m proud to work alongside my fellow mine rescue teammates to improve efficiency and safety for our industry. We achieve more together, and I owe this recognition to my team and to my supportive family,” said Steve Setzer, electrician at Brushy Creek Mine.

Steve has served as captain of Doe Run’s Maroon Team for the last 17 years and the team trainer for the past seven. As captain, Steve led the team to win national championship titles in 2010 and 2014.

One of the aspects I enjoy most is passing down what I’ve learned to the next generation of miners — people, like my son, who have followed in my footsteps as a mine rescuer at Doe Run.

Andrew Hampton, instrument tech at Fletcher Mine and Mill, nominated Steve for the National Mine Rescue Hall of Fame. “Steve is always challenging team members to do their best. His passion for mine rescue drives innovative thinking that helps make us better,” Andrew said. “When the call comes to help his coworkers, Steve is there.”

In 2010, Steve led a team that safely evacuated employees during a truck fire in one of our mines. In recognition of their service during this emergency, Steve and his fellow rescuers received a Certificate of Honor at the Joseph A. Holmes Safety Association annual meeting in Washington, D.C.

Our commitment to safety also helped us reach safety milestones at several of our locations in 2018. Learn more about our recent mine rescue and safety achievements on our Awards page.